Vera Otdelnova is a PhD Student at the State Institute for Art Studies, Moscow, and is working on doctoral research dedicated to the union of visual arts of Moscow in the 1960s and 1970s. She investigates institutional practices of Socialist Realism, particularly such problems as the relationship between the artist and the state in the USSR, the forms of their collaboration, and the different strategies that helped artists to escape from state control. Otdelnova has published scientific articles in Russian and international peer-reviewed volumes. 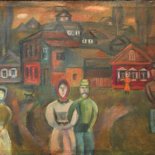 Marginality as a Space of Freedom

The term ‘marginality’ initially appeared in American sociological theory in the 1920s to describe the behavior of groups of immigrants who were living on the border of two cultures. Accepting the main rules of lifestyle customary among Americans, they also preserved many traits of their local tradition; thus, they could assimilate different elements of these two cultures. [1] In the end of the 1960s, after the civil unrests and strikes in Europe and the USA, […]