Interview With Franci Duran about her Video Art Installation 8401

Print
URN:   https://nbn-resolving.org/urn:nbn:de:hebis:26-opus-139035
DOI:   https://doi.org/10.22029/oc.2018.1158
Download as:    PDF
8401 is a video installation that includes a video loop showing images of a building and the streets in front. Depending on the room in which the installation is being shown, there are one or more devices playing sound files. The image — or images — of the video shift slowly but constantly, and they look a bit like a collage made from the snippets of different pictures. You can watch part of the video by entering the password watch8401. Make sure you have speakers or headphones to hear the audio track, which is an integral part of the experience.

Wibke Schniedermann: The video of 8401 is compiled of the Google Street View photographs of one address taken over several years. Before we come to the material and techniques used for the video, tell me about the location depicted in the photos and about its history.

Franci Duran: The location depicted is the address Avenida Jose Arrieta 8401 in the neighborhood of Peñalolen in Santiago de Chile. This is the current site of a memorial park, Parque por la Paz, Villa Grimaldi. It is the former site of a detention, torture and extermination center called “Cuartel Terranova” which was known as “Villa Grimaldi,” in reference/allusion to the former name of the property. Cuartel Terranova was operated by the Pinochet regime’s secret police (Dirección de Inteligencia Nacional DINA) and was most active between 1974 and 1978.

Before being seized by the military in 1973, the land and buildings had been owned by a succession of wealthy landowners and had housed, among other things, a theatre, a school and a nightclub. Of the approximately 4,500 people who were detained and tortured at the center, 241 are currently known or believed to have been executed, and more remain in the category of “detained disappeared.”

In 1989 the Chilean military razed the buildings with the intention of developing the land for condominiums. However, in the early 1990’s, after Chile’s transition to democracy, the site was reclaimed by survivors and disappeared detainees’ family members, and opened to the community as a memorial site in 1994.

In the mid to late seventies, the neighborhood was far from the more populated parts of Santiago and difficult to get to by transit. This gave the DINA relative secrecy vis-a-vis the many other permanent and temporary detention centers in Santiago.

WS: What happened to the prisoners who survived their incarceration? Are former detainees still alive today?

FD: What is known about the activities and even the location of Cuartel Terranova is based entirely on testimonials by survivors and the few guards who confessed. Detainees were blindfolded during their sometimes lengthy stays and so survivors’ memories were based mainly on sounds, smells, and tactile sensations, with only the occasional sight they might have glimpsed through a loose blindfold.

Those who survived were not released directly from Cuartel Terranova, they would be transferred to another detention center before being released. Many former detainees went into exile around the world, some remained in Chile. Many living former detainees and the family members of the known executed and detained-disappeared were involved in the reclaiming of the site and in the process that eventually led to the final form the memorial park takes today.

Tours of Parque for la Paz are generally conducted by survivors of the Cartel Terranova.

WS: Where can readers find out more about them and about the facility?

FD: The Park has a website with links to the history of the site, archival material as well as current educational initiatives: <http://villagrimaldi.cl>. The information is in Spanish.

I read the following articles while conducting research for 8401:

Judy Barsalou and Victoria Baxter, “The Urge to Remember: The Role of Memorials in Social Reconstruction and Transitional Justice,” United States Institute of Peace, <https://www.usip.org/sites/default/files/srs5.pdf>.

WS: Why did you choose Google Street View images?

FD: I have always been fascinated in the format for many reasons. Visually/formally the images are imperfect: the glitches, the curve of the image because of the way the images are being captured.

Conceptually, I wanted to make the piece from a position of distance. Because I am a former exile, my access to Chile was blocked and always experienced from a distance. My family left Chile in 1973 and was not allowed entry until 1983. Because our exit was traumatic, and I was young when we left (age 6), I do not have memories from that time. So my experience of Chile was based on what I was told and the very few photographs that were salvaged by my grandmother from our ransacked house and what our relatives gave us. Google Street View is ubiquitous, allows us to visually access many sites in the world and yet accentuates what is hidden even though it may be plain in plain sight.

WS: How far back can you date the images?

WS: How do you process or alter the images before including them in the installation?

FD: For each date, I “explored” the posted image from sky to concrete, and from many perspectives and made hundreds of screen captures on the computer. I catalogued each individual capture and rebuilt the view into a series of collages in Photoshop based on the shifting perspectives.

I brought the Photoshop collages into a compositing program (After Effects) and layered and animated or accentuated certain like and different moments and repetitions that occurred during each collage/study. The result is a video, fixed in time.

The video is an undulating light painting of the site, fluctuating across time, recollection, and recognition.

WS: What are the parameters/requirements for presenting the installation within the room?

FD: The installation visuals consist of a video that loops or repeats in the projection space. The idea is to fill one wall completely with the image, and determine the other elements of the installation (text, collages) depending on the room.

The piece is designed with flexibility in mind, and so installation and the component parts can vary. The sound, for instance, can be played separately from the video loop on up to three stand-alone media players and speaker sets that are hidden in the space. There is also a version of the video with sound and this digital file can be set to loop.

I am drawn to the idea that memory museums, memorials or monuments can be brought anywhere, and curious about what conversations can arise by transporting them to different contexts, in particular sites where state repression has occurred. The project is designed so that it can be exhibited in a variety of ways and locations, from a traditional gallery to a domestic space, reflecting the idea that both state repression and surveillance are ubiquitous and affect our most intimate lives.

WS: How do the sound recordings interact with or relate to the video?

FD: I wanted to explore the tensions that might be revealed by using “found imagery” and the live recording.

I went on a guided tour of Villa Grimaldi given by survivor and sociology-of-war professor Roberto Merino Jorquera. I recorded audio of that tour and this is the audio-recording I transformed for 8401. The recording was unusable as a document because it captured all the surrounding sounds. Some of those, especially the high-pitched calls of parakeets, would make it almost impossible to understand what the guide said. These bird calls turned out to play an important role in the recent history of the site. As the detention center’s location was kept secret and the prisoners blindfolded, it was not easy to find its location. During the time the center was in operation, this species of parakeets, called slender-billed parakeets, only lived in very few parts of the city, and the neighborhood of Villa Grimaldi, Peñalolen, was one of them. Recognizing the birds’ calls helped to identify the location.

The sound is intended to disorient or destabilize or intrigue visitors to the gallery.

Disorient, destabilize, intrigue: Franci explains that these were her main responses during her own tour of the site. The many outside sounds were disorienting; her attempt at recording and simultaneously translating the tour guide’s Spanish into English for other visitors had a destabilizing effect, she says, because her Spanish, while fluent, differs considerably from the academic Spanish the tour guide spoke. Translating the atrocities he described from personal memory meant to engage with his narrative and with the sound of his voice in a specific way. At the same time, the soundscape of the tour, including the bird calls, was so prominent that it took on a significance of its own for the embodied experience of taking that tour.

FD: Together with sound artist Paul Shepherd we worked on those recordings, especially on the parakeets’ calls. I wanted to capture the disorientation of the tour; capture feeling in addition to words. If the exhibition space allows, I prefer to set up more than one audio system and play several audio loops at different intervals. This ensures that the combination of soundscape and video image is unlikely to ever be the same twice.

WS: Coincidence seems to play into the installation in so many ways: uncovering the history of Villa Grimaldi often depends on chance; the seemingly botched sound recording of the tour provides an integral part of the finished work; the images for the video loop are taken from an online archive at random or depending on the days Google happened to photograph the site. What does coincidence mean for your work and how does the incorporation of chance relate to the abusive control exercised at the detention center and by the regime that operated it?

FD: I like incorporating random occurrences into my work. They serve as entry points, entry into the secret [of the detention center] and entry into a process of developing a collective understanding of what happened at this site.

All governments hide state abuse, but authoritarian governments do so in their own way and to specific purposes. Authoritarian governments depend on fear of physical harm to citizens and other citizens’ complicitness in their surveillance practices, like reporting their neighbors and colleagues as an obvious example. But also other citizens’ decision to “not see” and speak out about the abuses that are in plain sight. “Dissidents” in Chile were watched and were made aware they were being watched using the technologies and practices of that time, such as tapped phones, photography, surveillance by DINA agents, threats by phone, etc.

Franci Duran and Wibke Schniedermann. “Interview With Franci Duran about her Video Art Installation 8401.” On_Culture: The Open Journal for the Study of Culture 6 (2018). <http://geb.uni-giessen.de/geb/volltexte/2018/13903/>. 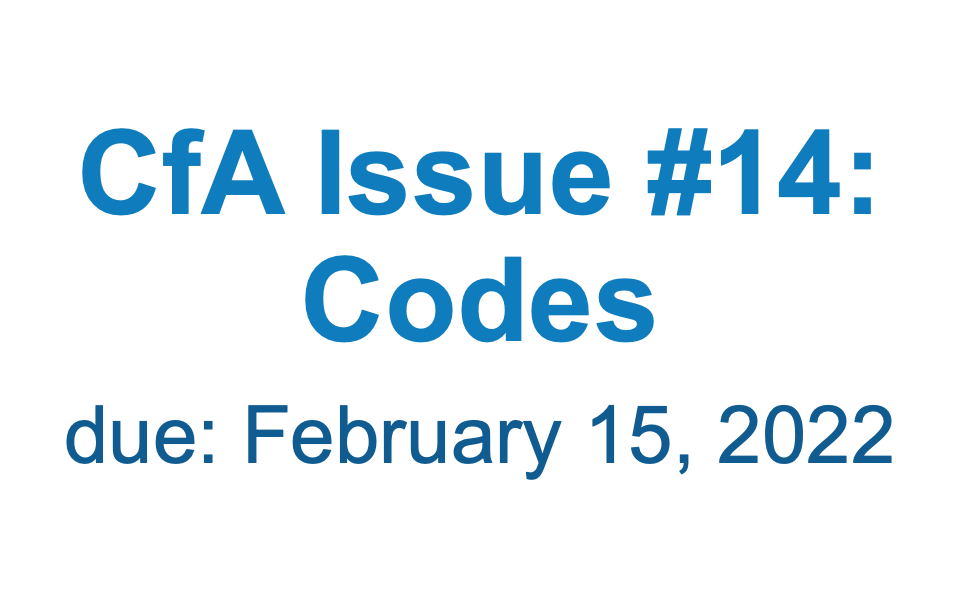 Editorial: On the Cultural Dimensions of Surveillance

The Divine as Non-Binary

Watch Your Back, Girl!