Sampada Aranke (PhD, Performance Studies) is an Assistant Professor in the Art History, Theory and Criticism Department at the School of the Art Institute, Chicago. Her research interests include performance theories of embodiment, visual culture, and black cultural and aesthetic theory. Her work has been published in e-flux, Artforum, Art Journal, ASAP/J, October, and Trans-Scripts: An Interdisciplinary Online Journal in the Humanities and Social Sciences at UC Irvine. She has written catalogue essays for Sadie Barnette, Rashid Johnson, Faith Ringgold, Kambui Olujimi, Sable Elyse Smith, and Zachary Fabri. She is the recipient of the 2021 Art Journal award for her article Blackouts and Other Visual Escapes. She is currently working on her book manuscript entitled Death’s Futurity: The Visual Life of Black Power. 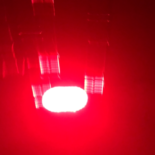 1_Capacity and Openness are not the Same as Ambiguity. Refuse Ambiguity. [1]  (David J. Getsy) Abstract art is often considered ‘ambiguous’ due to its openness and capaciousness. Even though this sometimes sounds like a compliment, it is not. More often, it is used to avoid confronting the particularities and complexities proposed by an abstract form and others’ investments in it. The same intransigent form can and does mean differently for different viewers. To call this situation ‘ambiguous’ is to fall back into hopeless subjectivism and avoidance. Instead, let’s call this situation ‘competing’ to show how much it is in the viewer’s incomplete attempt to classify that differences emerge and that supposedly stable taxonomies unravel amidst contestations and divergences of reception. Nominations of ambiguity are nothing more than declarations of resignation. We call something ambiguous when we give up on it and when we avoid committing to learning about all that does not fit into our categories. Objects, people, texts, events, and acts are not themselves ambiguous. They are particular, inassimilable, unorthodox, unprecedented, or recalcitrant. To invoke ‘ambiguity’ is to flee from the confrontation with something that does not easily fall into one’s patterns of knowing. This act of exhausted reading disrespects the particularity of that which is before us and instead writes it off as being at fault — as being unknowable, indiscernible, and incompletely categorizable. ‘Ambiguity’ is safe to invoke, because it places blame for our own limitations elsewhere. It is a method of deflection and scapegoating. It enables us to throw up our hands and beat a hasty retreat from confronting how limited our categories and systems are. After all, what do we really mean when we say something or someone is ambiguous? We mean that we cannot read, cannot identify, and cannot classify. Instead, I want to uphold the particularity and inscrutability that the backhanded slur ‘ambiguous’ attempts to manage. I want to see that particularity as a challenge to systems of knowing. ‘Ambiguous’ as an invocation or description merely signals the limitations of the one who would deploy that term. This does not mean I want everything clear and in its place. Quite the opposite: I want to embrace the radical particularity that always exceeds and undermines taxonomies. This is a queer stance, for it denies the applicability or the neutrality of those taxonomies as adequate representations of the world’s complexity. Rather, they are artificial impositions…